The immediate concern of the Trust after acquiring Number 4 was to secure the structural fabric of the building, which had suffered from the ravages of time, neglect and intense multiple-occupancy use and subdivision. These works involved re-roofing using salvaged and newly acquired natural slate, angle-strapping the front and side walls of the house where they had begun to lean out into the street, and doubling up floor joists to strengthen the framework of the house and increase floor loadings.

The yellow brick facade was only lightly cleaned to improve the appearance of the building, while protecting the fabric of the soft brick facings and retaining an air of venerability to the mellow elevation.

The original tuck pointing was in remarkably good condition on account of the facade’s northerly aspect, and therefore was only repaired where it had decayed to an extent that warranted intervention.

All sash windows were carefully retained, with decayed members cut out and new pieces of timber spliced in. Original glass was also preserved where possible. The fabric of the attractive c. 1900 shopfront, which retains some elements from the 1840s, was also largely retained, with replacement pieces of timber inserted where necessary. The thick glazing bars, originally designed to host heavy panes of hand-blown cylinder glass, were carefully spliced, retaining the elegant vertical proportions so characterisitic of Irish shopfronts.

The fascia of T. H. Barnwell was faithfully restored, while one of the few notable modifications to the shopfront was the insertion of a double-leaf entrance door in place of the former single door. Efforts were also made to faithfully replicate the original pilaster design with Greek key detail. The beautiful leaded fanlight with delicate gothic style panes of glass above the side entrance door was also restored, retaining all original glass where possible.

The six-panelled door below, which was likely to date from the original Georgian shopfront, was so decayed through intense use over the years that it required replacement. An exact reproduction was made. 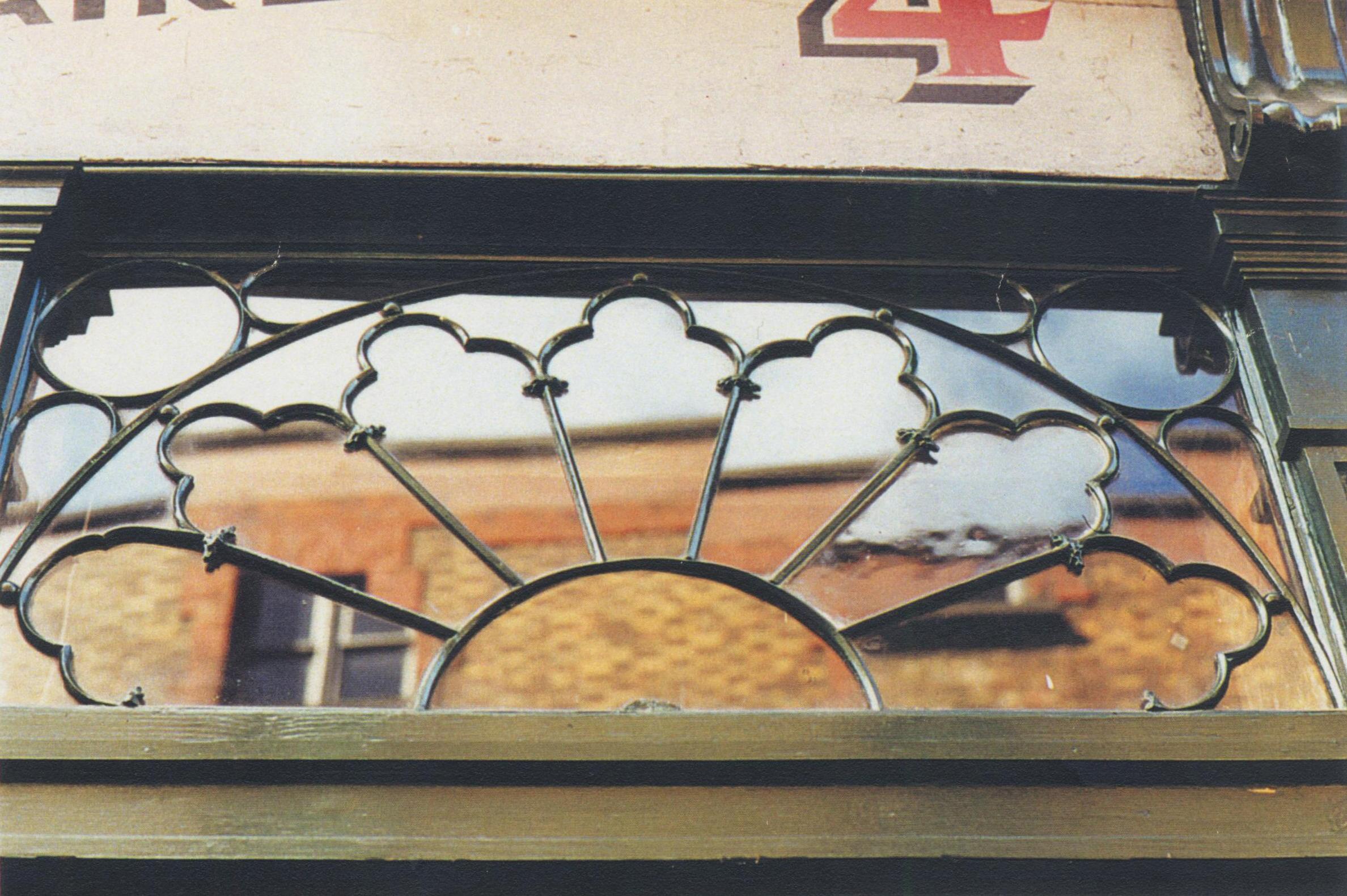 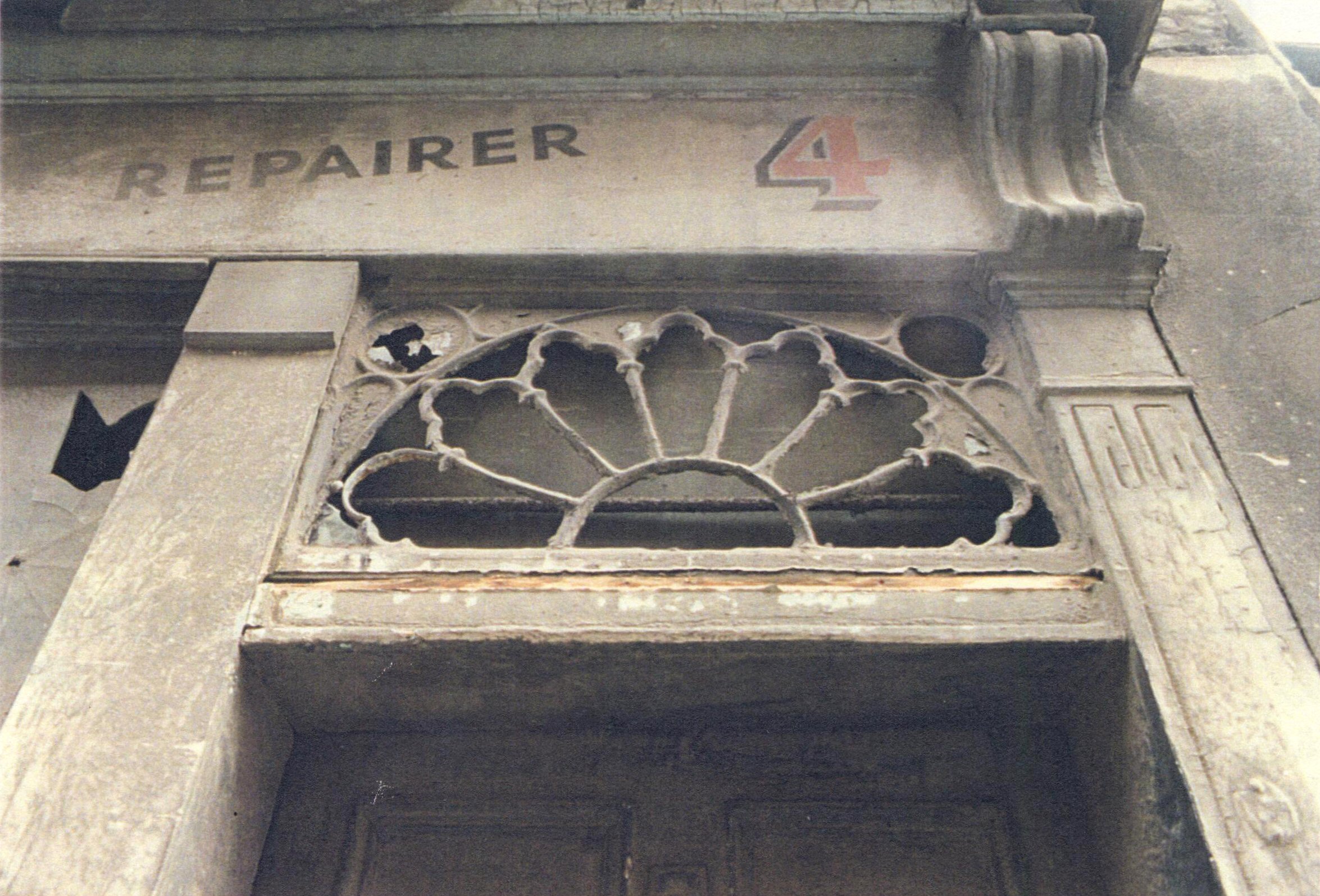 Inside, extensive water ingress to the building over the previous years of vacancy necessitated a complete overhaul of decayed lime plaster finishes to the walls. Most walls and ceilings were stripped back to their bare structural state - taking care to retain sound areas where possible - before being re-plastered using a three-coat lime plaster process. A running mould cornice was then masterfully reapplied in the traditional manner, using a timber mould to sculpt the wet plaster across the top of the wall and out onto the ceiling. 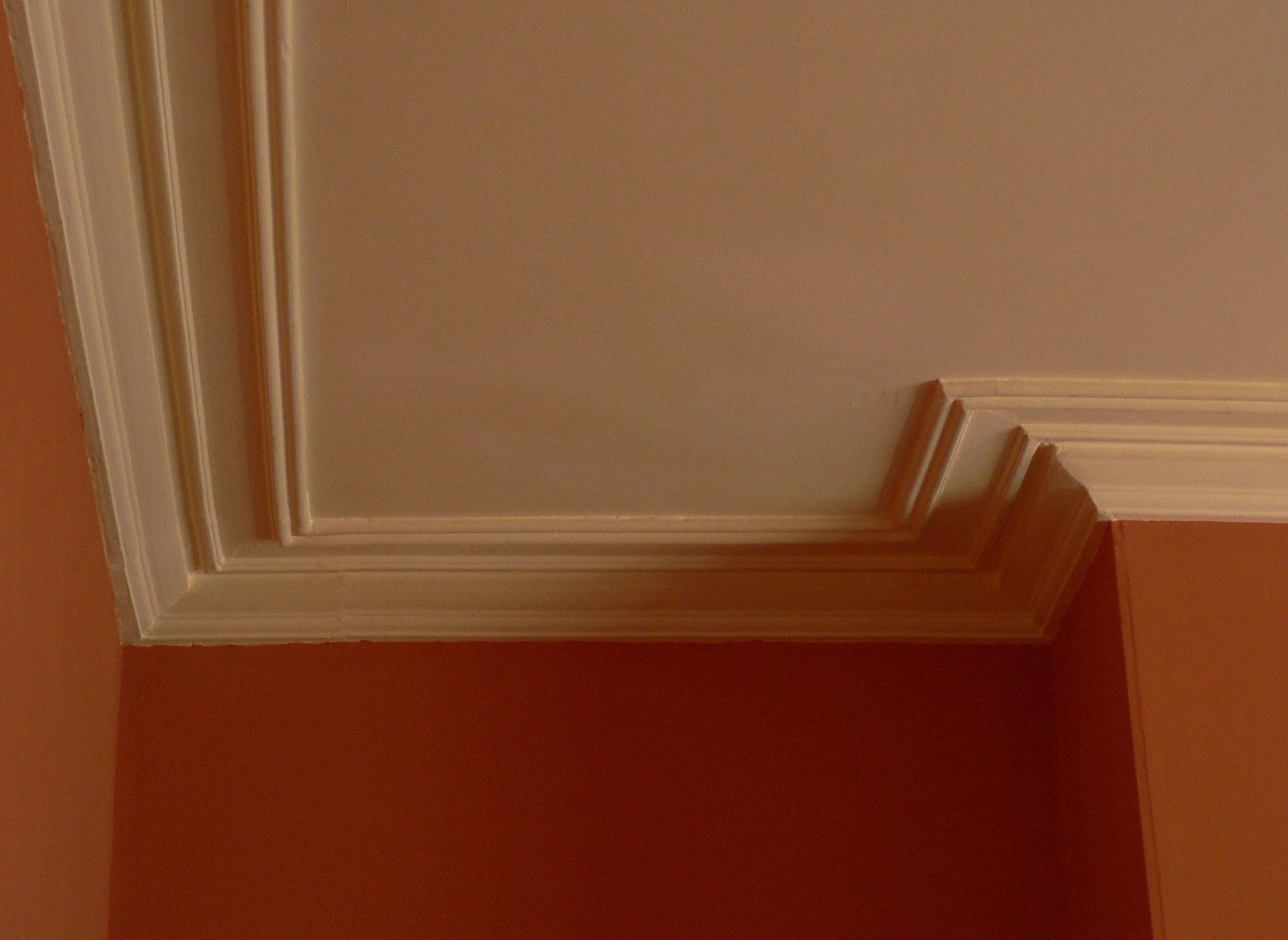 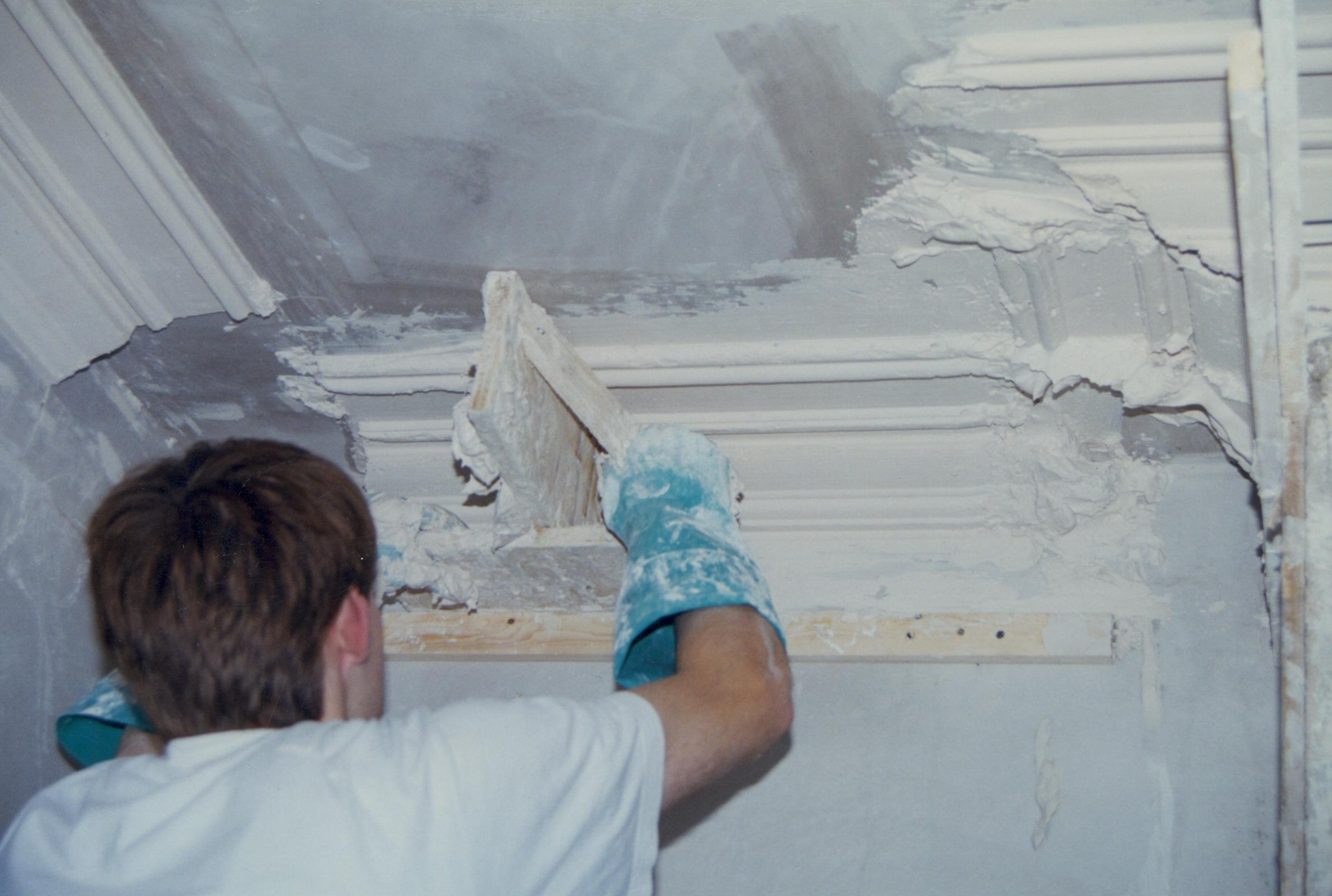 Running mould cornice being applied and after

As Number 4 predates the mass use of gas lamp pendents, there were never centre ceiling roses used in Number 4, and this tradition was respected in the refurbishment with plain, spartan ceilings restored. All room subdivisions were also reversed where possible.

All joinery, including original doors, skirting, architraving and balustrade to the staircase was carefully retained and only repaired and replaced where necessary. The restored gracious staircase with curved mahogany handrail is now one of the glories of the building, seen to best effect in the morning sun flooding through the handsome arched stairwell window. 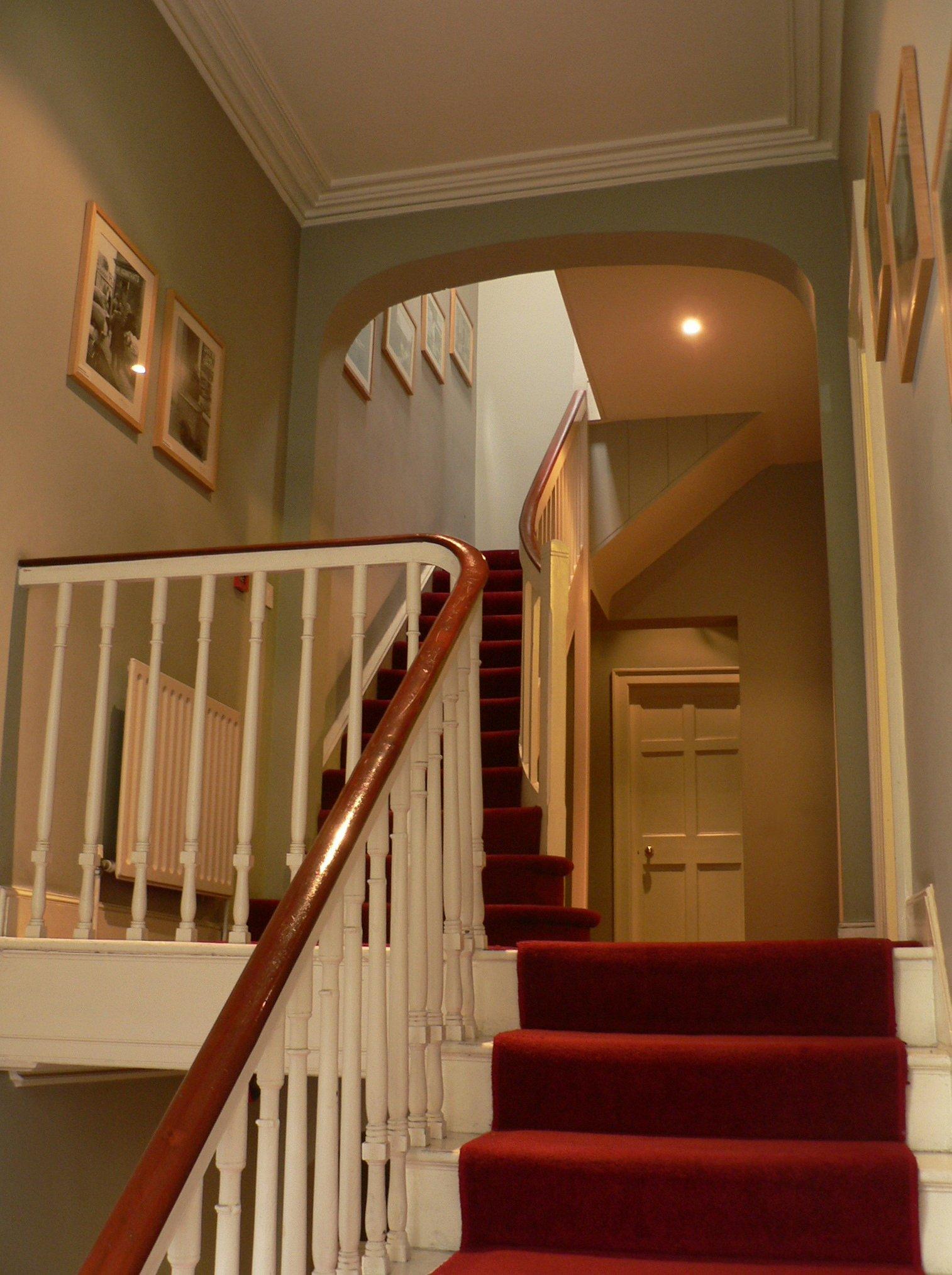 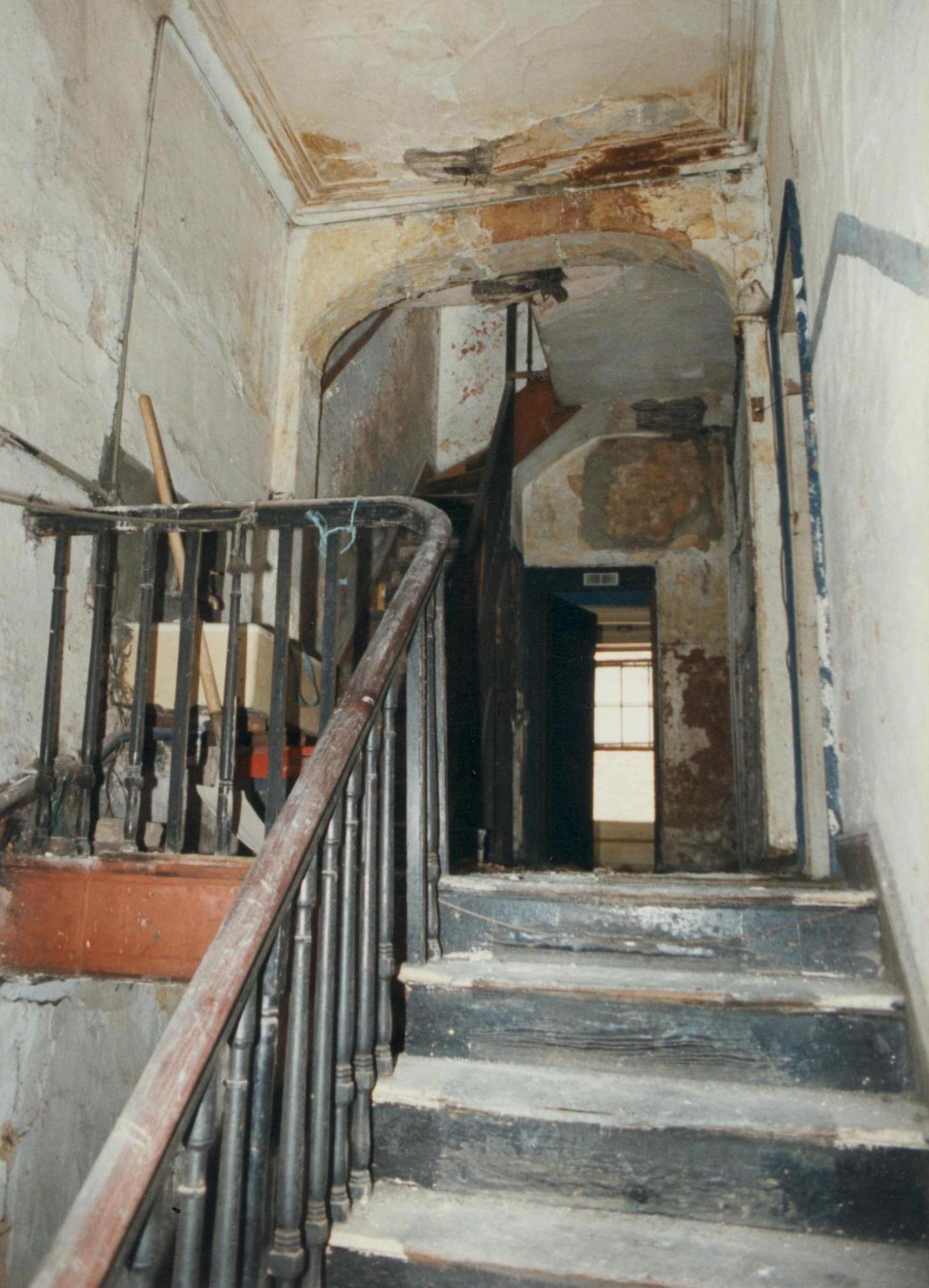 Some floorboards were found to be extremely decayed, as in the case of the large first floor room, where it was decided to replace these with similar Georgian boards salvaged from a house then undergoing alteration on Merrion Square. All window shuttering, complete with original security ironmongery, was also made operational once more.

The interior of Number 4 is typical of merchant houses of the early 19th century, with simple accommodation and spare decoration common to the stylistically transitional Georgian/William IV period. The house has a curious plan, with a room both to the front and back, separated by a small room in the middle and a narrow light well that penetrates all floors of the building. This feature is most uncommon in Dublin buildings, but there are references to a similar design in houses in the vicinity that were demolished on High Street in the 1970s. Few original features survive in the front shop, excepting a large chimneybreast, however the private room to the rear which overlooks the house’s back yard and St. Werburgh’s Church is much as it was in the 19th century, with a dramatic Wyatt window, running mould cornice and a black chimneypiece. The expansive Wyatt window is an indicator of the design ingenuity of the original builders, who anticipated the shadow cast by the adjacent St. Werburgh's by maximising on light. The window sizes otherwise diminish ascending the back of the building as more light is gained.

Along the side of the shop runs a narrow corridor from the side entrance on the street to the original Georgian staircase at the back of the house, which leads to the residence above. Originally, the first floor was likely to be have been used for relaxing and entertaining by its owners, where a large drawing room runs the width of the house overlooking Castle Street, with a smaller square room at the back of the house possibly once used as a dining room.

The second floor features a similar arrangement of rooms once used as bedrooms, with an interesting third small room to the centre of the house lit by the four-storey light well, possibly used as a child’s bedroom, water closet or washroom originally. The third floor features a pair of large rooms which span the width of the house at the front and rear, as well as another subdivided central room. The aim of Dublin Civic Trust in acquiring Number 4 was to lead by demonstration in the restoration of a typical Dublin merchant house using traditional skills and materials in accordance with best conservation practice. This was to show that the restoration of buildings such as these not only preserves our architectural heritage and benefits rundown streets, and the cultural wealth of city at large, but that it is also economically viable to do so.

The Trust acquired Number 4 in 1996 as part of its Revolving Fund project, when the building had been vacant for some time and was scheduled for demolition. The neighbouring plot to the east of the house had already been cleared, while a former factory building occupied the site to the west at the junction with Werburgh Street. The house was not listed for protection at the time, however the discovery of medieval timbers, likely to have been salvaged from the timber-caged house demolished in 1812, embedded in the western exterior wall, was to result in the building being preserved. Designated a National Monument on account of pre-1700 elements surviving in the house’s fabric, Number 4 was saved from demolition and is now also a Protected Structure.

Number 4 Castle Street demonstrates what can be achieved with traditional townhouse and shop buildings that have fallen into neglect. This applies equally to Ireland’s provincial towns and villages, where so many vernacular buildings, often with original shop fronts and intact living quarters, languish in decay, sometimes awaiting ill-informed adaptation or wholesale demolition.

With an understanding of the origins of a building, its original function, design features and surviving elements, it can be sensitively rehabilitated for modern use – reinvented as a social, cultural and economic asset. Shopfront being redecorated in 2015 Record of occupant in 4 Castle Street in 1879